The temps in the midwest are breaking records but that doesn’t stop school from kicking off. And as much as we enjoy the summer days which turn into late night activities, I am ready for structure. Kids crave routine, even when they don’t realize it, is my belief. With early-risers in the house, the start time for school doesn’t throw us off; however, I know it’s a time for adjustment for many. If you’re looking for support with this transition to school, Moomah, the online magazine, has provided a simple and useful technique, the family chalkboard. The key is to allow the children to write down their own goals within their mourning routine. By handing over the power of the chalk, kids may enjoy creating their own schedule to kick off the season, one which could potentially stick. A little chalk dust is good for any kid. Aside from the supply lists your school asks you to assemble, who says a parent doesn’t need a set of his or her own clever new pencils during the back to school season?

Since regular yellow Number 2’s are so yesterday, the New Black Pencil Set from Fred & Friends  will keep you on the hipster edge. Write on. (more this month on freshening up office supplies!)

(Emmett heading off to 2nd grade!)

Now if we could only stop time for few moments.

Bobby Baby (BB), an old friend of mine whose nickname was bestowed by my cousin I believe, is a forty-something father of two who grew up a few blocks from me (on the same street where I live today) and he may be the smartest person I know, or at the very least, the person to whom I am currently most thankful to have in my life, save for immediate family and Theo Walcott.

A couple weeks back a neighborhood farmers market was raffling off a Yuba Boda Boda (donated by Calhoun Cycle), a crazy cool cargo bike/taxi of African origin, and Wendy, wanting to support a good cause and recalling that I’d recently been talking about the bike of dubious provenance I’d had since college and thinking it may be time for a new one, bought three tickets, one for each of our kids.

You should know that Wendy and I are not “winners”, that is, we don’t “win” stuff. Actually, I won a super-schlocky sculpture thingy playing charity bingo with Ms. Richfield in a church basement 10 years ago, but if you had seen the item you’d agree it wasn’t a “win” of distinction in any positive sense and I’ve largely forgotten about the whole matter. Beyond that, nothing.

But back to the market. BB had, at another raffle-type event some time ago, suggested to Wendy that after filling out the pertinent information, she crumple up the raffle tickets before depositing them into the jar with all the other entries. Now I’ve always thought advice is kind of a funny thing and reminds me of snowflakes; people say they look forward to it, but when certain advice is actually received it can be a little cold, and at times, unwelcome. BB doesn’t offer unwelcome advice. Wendy crumpled the 3rd ticket and only the 3rd ticket, (it remains unclear why only the singular crumple), Bea’s, and guess which ticket was pulled.

I wasn’t at the market when Wendy bought the tickets and had no idea about the whole raffle itself, so you can imagine my surprise when a couple weeks later I received a text and photo from my buddy Sugar saying, “Um, dude, I think your [quite young] daughter just won a really cool bike”. That bike has seen heavy use ever since. You can’t get me off it.

Thank you Bea, thank you BB, thank you Boda Boda. The pen is mighty, yes, but sometimes an extra crumple helps, too.

This afternoon, while my tooth was being drilled for a crown fitting (good times), I took my mind off the chainsaw noise and zoned out to orchestral music on a headset provided by the dentist assistant. Oddly enough and bit scary to admit, this was the first time I took a breath and relaxed for a moment since returning home from vacation. It’s been nonstop movement.

I realize I can’t complain. It was a sheer gift for the five Browns to spend two weeks in the little town of Manzanita on the Oregon coast, leaving nearly all commitments back at home. I had time to read, play hard, rest well, and write often in the half-dozen journals I lugged with me (you can’t think I’m joking, can you?). Actually, one of my highlights was Oliver asking for his very own journal, to “hold memories from the trip.” Big smile.

Which leads me to today. With too many topics spinning in my mind, I’m going to leave you with a few of my latest and favorite finds.

I found this brilliant book, Post Secret, at the local Cloud & Leaf Bookstore on the coast (it now sits on our coffee table.) The author, Frank Warren, asked strangers to write down their inner secrets on a postcard and then send his way. His mailbox has been full ever since. Frank now runs the blog, Post Secret, where he displays his recent favorite cards, Sunday Secrets. 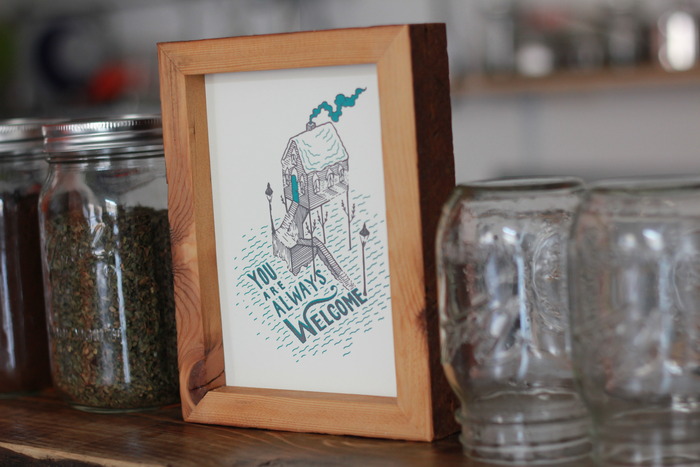 While attending the Stationery Show in May I met the Holstee folks, a company who focuses on mindful living.  Their latest project is a handmade, wooden frame to display any 5×7 card, turning stationery into art. Another worthy Kickestarter! (only 5 days left, so check it out)

Dalton H. Ghetti began sharpening his own pencils by hand as a little boy. As an adult, he’s turned his talent into both art and a meditation for himself.

While in Portland for the night, I visited my favorite store Alder and Co and found a fabulous stationery line, Small Adventure, new to my eyes. (thanks for the tip Yas at Quill and Fox!)

Finally, with the chorus of crickets chirping outside my window, summer is coming to an end. Enjoy.

During most visits to my in-laws’ home, I notice a piece of writing Nick created which sits prominently in his parent’s office. I love the gold frame and the blue matting. I love Nick’s signed name (as if it were needed) in the bottom corner, with the opposite corner torn. I notice the selection of colors, the change from lower to uppercase I’s. He most likely made this in art class, or perhaps goofing off at home. He wasn’t afraid to make bubble letters as most girls did at that age.

The piece captures Nick as a kid even more than a photo may share. By framing his work from grade school, his mom made him feel important and gave applause to writing. Maybe instead of artwork or photographs we all can start framing more handwritten words. A war letter from a great-grandparent, an apology note from one child to another, a greeting card from your past, a reply to a wedding invite. It might cause one to pause for more than a second and think about a different time, a younger version of someone you know or honor someone who has passed.  Handwriting equals art, it works for me.